When Did the Celebrities Become Our Heroes? 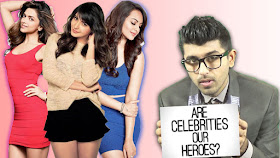 Now I am not asking you to unfollow these people, do follow them but follow them within the spectrum of reason, not blindly. If you are affected by their statements, by their political affiliations, or their stance regarding an issue, then you are taking them a bit too seriously. Loosen up, man! You're your own beautiful, magnificent, diverse person. And the most unique thing about you is your original identity. And the moment you try to become someone else, some fictional character you saw on some TV show or movie, you lose your inherent uniqueness. You join the herd and become the crowd. You go from something to nothing.
And it is their job to provide you with light hearted entertainment, so take them lightly. Stop getting influenced and bothered by anything other than their acting. They are just actors, they don't control the world. You do.
So spend some time with yourself. Introspect. Get your priorities straight. And choose your heroes for their virtues and talents, not for their appearances.
Personally, if you can see through this bullshit, if you haven't been yet turned into a mindless zombie consumer whose life has been reduced to buying whatever Alia Bhatt or Kendall Jenner wore on their instagram accounts, if you can see how fake this celebrity kingdom really is, then you are already a hero.
And for the rest of the world, you have a history full of scientists, philosophers, writers, musicians, psychologists, reformers, engineers, strategists, painters, great rulers, historians, biologists, freedom fighters, explorers, visionaries, poets, mathematicians, economists, leaders, the choices are unlimited. So, make a better one.
‹
›
Home
View web version